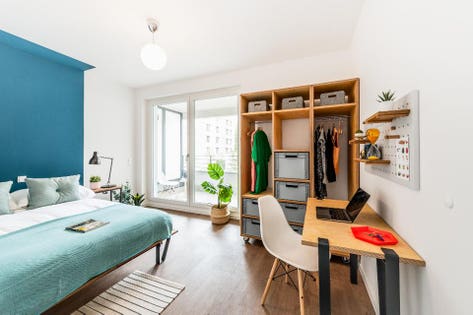 Following the migration of hipsters and millennials, the European co-living company Quarters is putting down roots in Brooklyn.

Founded in Germany in 2012 by a pair of serial entrepreneurs, who famously got their start in business by selling sausages online, the brand, geared toward traveling professionals, will soon have 3,000 beds across the United States and Europe.

Quarters already established itself in New York City, with 111 beds in sites at 324 Grand St. in Manhattan’s Lower East Side and 629 E. Fifth St. in the East Village, and 84 being built at 1190 Fulton St. in Bedford-Stuyvesant, Brooklyn. This week, however, it announced another 160 beds for a 50,000-square-foot site comprising two buildings at 186 N. Sixth and 165 N. Fifth streets in North Williamsburg, and 46 at 251 Dekalb Ave. in Fort Greene.

“We’re thrilled to continue growing our U.S. footprint in New York City,” Quarters CEO Gunther Schmidt said in a statement. “New York, particularly Brooklyn, draws young tech and creative entrepreneurs with its vibrant community culture. At Quarters, we provide that same culture through a mix of amenities and programming in deluxe living accommodations at a more affordable price than market rate.”

The North Williamsburg location, being developed by David Dweck of Duke Equities, will feature an array of amenities, including a 5,000 square-foot landscaped roof deck with views of Manhattan and Brooklyn, a lower-level recreational room and entertainment area, office and social spaces, a library and a gym. The Fort Greene building will be outfitted with an outdoor patio and courtyard.

In line with what has become the standard for the c0-living industry, Quarters offers private bedrooms with shared bathrooms and kitchens in month-t0-month leases. Starting prices for Quarters’ Brooklyn beds have not yet been released, but leases for the Manhattan location start at $1,699. By comparison, the median rent for a studio apartment was $3,499 in Manhattan in the fourth quarter of 2019 and $2,991 in Brooklyn, according to the brokerage Douglas Elliman.

Quarters’ Brooklyn news comes on the heels of a $300 million funding raise for its U.S. expansion and roughly $1.1 billion raise for Europe, both announced last winter. The rounds are set to bring 1,800 new units to the U.S. market over the next three years and 6,000 to Europe in the next five.

The conversation about co-living has been growing recently, after the co-working giant WeWork’s IPO tanked last summer. Experts predict a bright future for co-living, however, as millennials struggle to buy homes due to obstacles like soaring sales prices and trauma from 2007 subprime mortgage crisis. In November, the co-living company Bungalow announced that it raised $47 million in a Series A extension and Series B round of funding. In October 2018, The Collective, yet another co-living venture, announced plans to build a $450 million, 350,000-square-foot complex on the border of Williamsburg and Bushwick in Brooklyn.

Office Supplies
Online Retailers Are Moving into the Real World
Marketing Strategies For Real Estate Investors- How To Real Estate Podcast #2 (Marcus See)
Small Business Services chief: Revenues in Chinatown down 40% due to coronavirus
Avoiding Capital Gains Tax When Selling Property
Why FICO’s new scoring model may not mean much for consumers