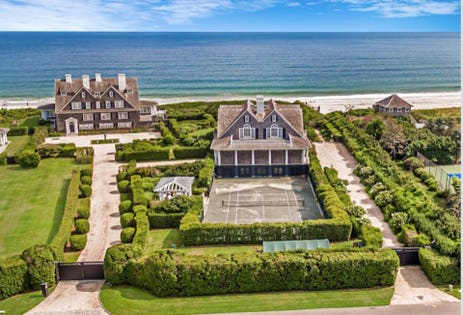 Gin Lane in Southampton is one of the world’s most famous addresses. Currently for sale on Gin Lane is one of the three most expensive listings for sale in the Hamptons. A rare and special estate, it features two major residences on one property, one of which is a historic oceanfront house built in 1888.

Originally named Eden Cottage, it was constructed in a classic Shingle style by first owner Robert Olyphant, a member of one of New York’s oldest families. Past members of the Olyphant family have been presidents of the Delaware & Hudson Railroad, merchants and one served as surgeon general in the Revolutionary War. Between 1897 and 1902, the home belonged to Elijah Kennedy, an author and president of an insurance firm. He renamed the house Bonnie Dune. The next owners, lawyer Anson McCook Beard Senior and Ruth Hill, daughter of James Jerome Hill, a founder of the Great Northern Railroad, changed the name back to its original and lived here for the next 48 years. During that time, the home was used in some scenes in Woody Allen’s Interiors, a 1978 film that received five academy award nominations.

In 1990, the home underwent major renovations by the new owner, Carl Spielvogels, a United States ambassador to the Slovak Republic. Under his ownership, the home was again called Bonnie Dune. The original house has often been attributed to architect Stanford White, but his great-grandson Samuel White, also an architect, suggested that it was actually designed by Bruce Price, known for his innovation with the Shingle style. Samuel White oversaw the renovations ordered by the Spielvogels and worked alongside famed interior designer, Jed Johnson, who also worked with Mick Jagger and Richard Gere (Johnson was later tragically killed in the TWA Flight 800 plane crash.)

In 2000, architect Frank Greenwald built the second residence on the estate. He designed it to match the style of the original residence, with dark polished wood floors, French doors, transom windows and coffered ceilings.

“There are two separate lots, and you can buy the newer house, also called the guest house, for $49 million,” says Harald Grant, listing agent with Sotheby’s International Realty, Southampton. “Both properties have waterfront footage, their own driveways and each has its own gunite pool. There is also a sunken all-weather tennis court on Gin Lane.”

With four acres of land, the 22,000 square foot interiors include 21 bedrooms, 18 full bathrooms and three half baths. This property is one of the largest for sale in America.

Office Supplies
Flipping 204 Houses in 1 Year | The Good AND Bad
This Real Estate Agent Lets You In On His Secrets | Secret Lives Of The Super Rich
Mortgage Delinquencies Set a NEW Record: Housing Market Bulletin
How Biden’s plan to tax real estate investors could affect the industry
How to Flip A House – 10 Tips To Flipping An Old House