It’s been a big month for homebuilders.

But even with the positive housing data and the Federal Reserve cutting its benchmark interest rate by 25 basis points on Wednesday — both of which are generally bullish for homebuilders — experts aren’t signing off on chasing the group.

“We’re looking at a similar situation as we saw back in April,” Matt Maley, chief market strategist at Miller Tabak, said on CNBC’s “Trading Nation,” referencing a chart of the ITB. “Back then, I said, ‘Jeez, the group’s getting overbought on a near-term basis,’ and … it’s actually a little bit more overbought than it was in April.” 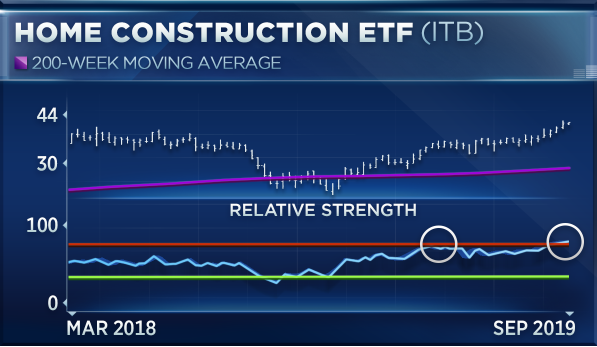 While “there’s no question” that the 12-year U.S. homebuilding level is positive for the construction stocks, “this is a group that’s getting a little bit ahead of itself,” Maley said.

“Unless you’re a very short-term trader, I wouldn’t take profits,” he said. “Rather than chase the group here, … I think you look for pullbacks; you’ll do a little bit better. But there’s no question those housing starts data should help the group.”

“We think that the sector’s taking a breather,” Bapis said in the same “Trading Nation” interview on Wednesday, noting that many of the housing stocks have doubled in price in the last six to 12 months.

“We’re not panicking and selling the whole group” despite muted forward-earnings estimates, Bapis said. “Given the interest rate environment, you may see housing starts continue to rise and you may see the sector continue to perform, but we’re … stepping away from it a little bit.”

Part of that strategy comes from looking under the hood at the business of housing itself, he said.

“Our research analysts have said that a lot of the high-end construction projects and homes are starting to slow down, and that’s kind of an indicator to us that people are waiting and seeing how this breather shakes out,” he said.

The ITB rose by less than 1% in Wednesday trading.